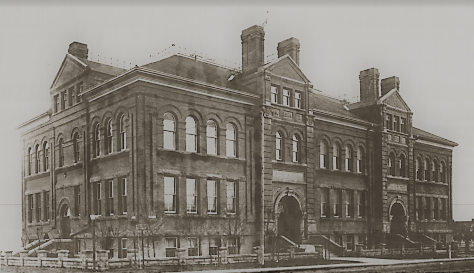 Other form(s) of name

Edmonton Public Schools Archives and Museum is the official repository for the Edmonton School Division. The collection is housed and displayed in the restored 1904 historic McKay Avenue School, the site of Alberta’s first legislature. The 1881 Schoolhouse (Edmonton School), the first public school in Alberta (also restored) is located on the same property.

The Edmonton School Division is a public system operating within the City of Edmonton, in the province of Alberta. The building’s site has had an operating public school since 1881, when Alberta was a District of the Northwest Territories, before becoming a province in 1905.

As a department of Edmonton Public Schools, Archives and Museum is the operating body of the services and programs offered at historic McKay Avenue School and the 1881 Schoolhouse.

The Edmonton Public School Board encourages the collection and preservation of records and objects which form the permanent record of the Division's philosophy, policy, people, and performance. Edmonton Public Schools Archives and Museum is the official repository and custodian of such materials. The Board believes that records and objects assist in the interpretation of history, and that these materials should be accessible to Division staff, students, parents, and the general public, subject to any restrictions imposed by law or Division policy and regulations.

Historic McKay Avenue School closed in 1983, it was given a new lease on life when the Archives and Museum took over. After an extensive restoration and modernization in 1987, the school building was reopened as the home of Edmonton Public Schools Archives and Museum. The building is a Municipal (2015) and Provincial (1976) Historic Resource as well as being listed on the Canadian Register of Historic Places (2006).

The Architect was Henry Denny Johnson and the Builder was R. J Manson. Originally constructed in 1904 with an addition in 1912. The three-storey building embodies the Richardsonian Romanesque architectural style and features a red-brick facade, sandstone trim, round arches over the windows and doors, and Ionic columns flanking the main entrances. Source: Alberta Culture and Community Spirit, Historic Resources Management Branch (File: Des. 135)

The original classrooms have been repurposed as a Reading Room for researchers, conference rooms, period classrooms, program delivery, workspace and storage rooms for archival material as well as artifacts.

Also on the same site, is the Edmonton (1881) School, now referred to as the 1881 Schoolhouse. This was the first public school in Alberta and the first sawn lumber building in the settlement of Edmonton.

The holdings consist of minutes, correspondence and annual reports of the Board of Trustees of the Edmonton School Division and committees of the Board; student records; yearbooks; photographs; blueprints, plans and correspondence related to purchasing, construction, maintenance and renovation of school buildings; promotional and public relations material; curricula and teaching material; financial records, including the 1885 assessment roll; school division planning documentation; administrative files and bulletins from the office of the Superintendent of Schools; records of individual schools, including staff meeting minutes, student union records, and material related to sports and club activities.

The Michael A. Kostek Reading Room is open to the public and welcomes all researchers.
There is no retrieval of new research material after 3 p.m.
Some material is subject to provisions of the Freedom of Information and Protection of Privacy Act
If you plan to visit the Archives, please make an appointment by calling 780-422-1970 or emailing archivesmuseum@epsb.ca to have your material retrieved and on hold prior to your visit.
There is no admission fee. Donations gratefully accepted.

The building has accessible parking, a ramp located in the Theatre at the entrance on the south-east corner of the building, off the parking lot, an elevator and accessible washrooms on the first and second floors.

Edmonton Public Schools Archives and Museum offers, free of charge, advice and information about their archival holdings. The Michael A. Kostek Reading Room contains a reference library of yearbooks and textbooks with seating and table space for 12 researchers.

Edmonton Public Schools Archives and Museum will provide a digitized copy, subject to copyright law, if the original is in good condition, is for individuals engaged in private study or is research for a non-commercial purpose. Scanning fees for photographs are under review. Please consult staff for details.

Dates of creation, revision and deletion